Many years ago I used to read a science fiction  strip in a British newspaper. I am not a particular fan of such strips but this one really impressed me with the quality of the drawings, the dialogue and the sophistication of the stories.

Recently I decided to try and identify the strip and, if possible, get copies of some of the stories.

This is what I knew before the search.

The strips were  published in an English national newspaper, probably sometime in the 1960s or 70s.

I did not know the name of the strip or its author. 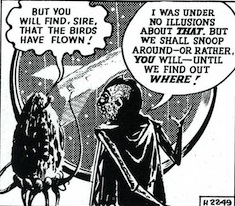 If I had had this as a digital image I could have fed it into Google and done a ‘images like this’ search. Unfortunately, it was just in my head.

This is what I found out after a lot of disorganised searching.

The strip title was ‘Jeff Hawke’ and it was drawn by Sydney Jordan. Many of the stories  were written by Willie Patterson. The strip below is from a Story called ‘Overlord’. 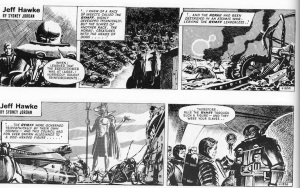 The Jeff Hawke graphic stories were published in the Daily Express between February 1955 and April 1974 as a total of 69 separate stories, with an average of 94  strips in each story. A story would have taken about three months to publish in full  and fans who wanted to read the full story had to buy the Daily Express each day.

Once I had the name of the series the best source of information was this Wikipedia article.  According to the  Wikipedia article the golden age was between 1956 and 1969 when  Patterson joined Jordan, first writing dialogue and later plot lines.

Jeff Hawke started out as a Dan Dare type character but  Patterson changed that.  Hawke became more and more focused on reasoning, diplomacy and moral virtues instead of brute force and ripping yarns type bravery. He is often an ambassador of mankind to alien species.  He is  a leader but often conciliatory rather than confrontational. Often he is more an observer than a central character.

Aliens were usually the main characters in Jeff Hawke. They were portrayed as more technologically advanced and often wiser than humans.  Some stories linked aliens and  human archaeological mysteries and myths. For example, one story [Wondrous Lamp] gives an alternative explanation for Aladdin’s Lamp.

Though the series is almost unknown in England it is apparently very popular in some European countries, especially Italy and some Scandinavian countries.  I believe that all the stories have been published in Italy.

Both are available from Amazon and people selling through the Amazon site. I bought both volumes. Before I opened them I wondered if I was going to be disappointed. That they would not be as good as I remembered.

I need not have worried. The artwork, dialogue and stories are superb.  Though they were produced 40 or 50 years ago  they do not seem dated now.

The two strips below are from a story called the ‘The Immortal Toys. Some exhibits in the British Museum have been found to have unusual properties and Hawke investigates. 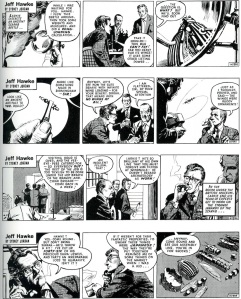 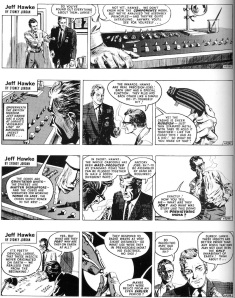 Now I want to read the rest of the stories. Titan show no sign of publishing more collections of the stories. I suppose the two books did not sell well when they were first published.  I can think of two reasons for that. One is the books were priced at £16.99. That is a lot for a comic strip that had not been in the public eye for 34 years. The other reason might have been the book covers. They were crude and lurid. They gave no indication of the quality of the work within.

Fortunately, there is another source. The Jeff Hawke club has all the strips and is publishing them in professionally printed and bound volumes at a very reasonable price. The full story is here.

3 responses to “Searching for Jeff Hawke”

This site uses Akismet to reduce spam. Learn how your comment data is processed.